I have always had an immoderate enthusiasm for the printed word and making books has shaped my life for the last half century. Growing up I was surrounded by the Modern Library classics crowding the family bookshelves. This passion, coupled with a love of poetry & like minded fellow travellers, spawned Swamp Press and brought the business through many different incarnations.

It all began in the 70’s, with the very optimistic view that the world required poetry books by new authors and these works needed to be printed with metal type on interesting papers using our own do-it-yourself design sensibilities and accompanied with original art.

In the very beginning a friend of Jo Mish, Marshall Webster (aka Swamp to his close friends), helped Jo publish his first chapbook: In the Shipyards (1973). Having taken printing in shop class (Kelsey hand press) I suggested that we could start a publishing venture. We decided to look for a press and Jo found one where he was having some printing done for his Poets in the Schools gig. We named our publishing venture Swamp Press not in relation to wetlands, or the primordial ooze (the origin of all things), but in honor of our grand patron, Swamp. 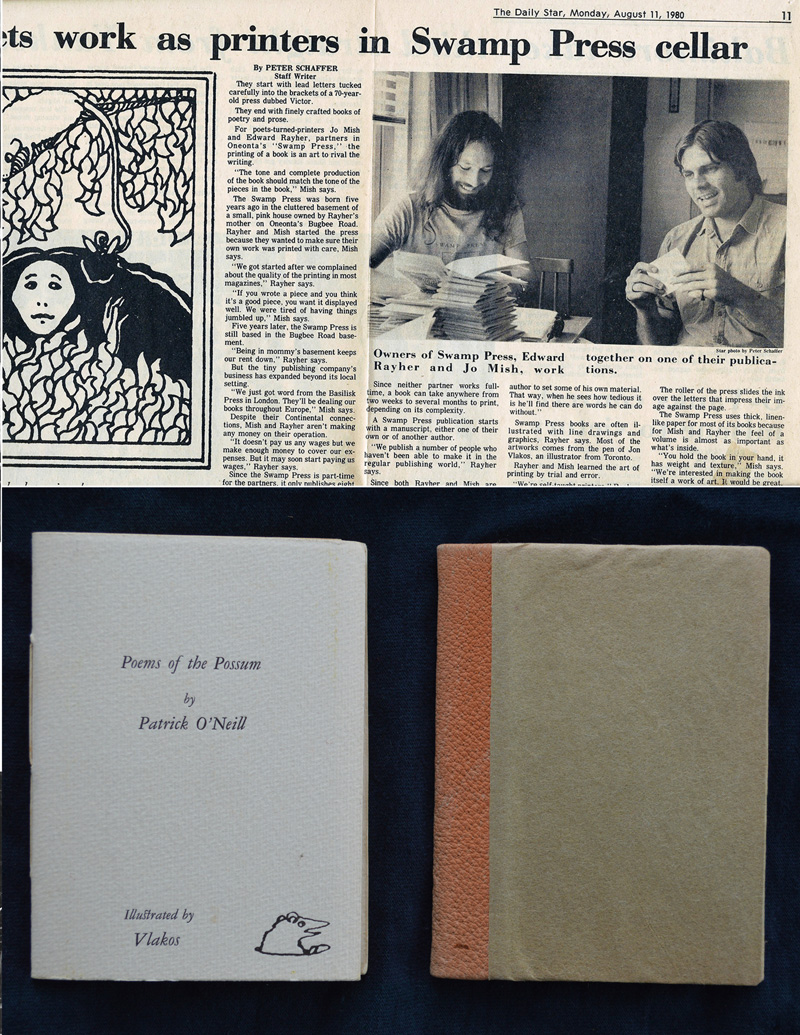 So our small band of poets and artists: Jo Mish, Sylver (aka Knarf) Pondolfino, my brother Robert and myself, bought a ten by fifteen Golding Art Jobber press from a printer in Pittsfield, MA, convinced my mother to allow us the use of the basement, then hired Fox movers (not happy with how heavy the press was). After a struggle getting the press out of their pickup truck, we rolled Victor into the basement on its flywheel. We were off and running. This was in Oneonta, New York, at 4 Bugbee Rd. We then named our Golding 10 x 15 press Victor (the dancing bear) in honor of a bear touring with a circus.

By 1975 we were printing the Tightrope, our poetry magazine, as well as chapbooks. In the early years we produced over seventy volumes, often in dual editions of soft and hard cover; obtained National Endowment for the Arts grants; frequented book fairs, bookshops, collector’s collections, rare book rooms and libraries. The usual quest for establishing a small literary press. Our imprints acquired a Montreal, Canada address when Robert was doing his undergraduate work at McGill, and I had joined him pursuing a MA in Philosophy.

In 1980 I moved to Amherst, Massachusetts, for graduate school (PhD in Social and Political Philosophy and a MFA in Poetry). I moved the press from Oneonta, spending summers publishing and printing, while Jo ran his own press, Serpent & Eagle, out of his bookstore. Over the years my endeavors gradually morphed into a full time occupation of printing and eventually running a type foundry—against my own best instincts.

Early on, having seen a Linotype I decided type casting was just too much trouble and stuck to that until Dan Carr took me to Metcalf Printing in Boston where he was acquiring matrices. In order to put a salve on my guilt for not saving Monotype casters and keyboards from the dumpster, I asked how much they wanted. The word “free” meant I no longer had an excuse. So the mad acquisition of heavy metal hot metal machines ensued. In the course of these events I worked at Commonwealth Printing, a worker owned and run shop. Eventually a press operator of a thirty-inch Miehle offset press, I learned the ropes of commercial printing during the crazy era of revolutionary Mac devices and digital design. Burdened with a dissertation and earning a living, publishing slowed, but the press expanded its equipment holdings, adding yet more Monotype machines along with Heidelberg presses. One of the great joys of the time was purchasing matrices by partnering with Greg Walters and others then dividing up the spoils.

At the ATF auction on August 24, 1993, I acquired the Benton Matrix Engraving pantograph, but continued making electroplated matrices due to the fact the auctioneers separated vital parts from the Bentons, which made them useless on their own. Some time later the missing tool grinder and quills were acquired and I started making one-offs.

In June of 1999 I brought the press to Northfield, MA where a four bay garage was over time converted into the shop’s new home. It wasn’t until 2010 that the project of making Cherokee matrices at the behest of Frank Brannon of Speakeasy Press forced me to develop a system for making an entire suite of matrices. The trick was to figure out how to make matrices that all aligned so that once on the caster, no changes to alignment were required when changing from one matrix to another of the same font. This set off a cascade of projects for type designers such as Russell Maret, Barbara Henry, Sonya Clark, Jen Farrell, Jerry Kelly, and printers such as Patrick Goossens, Pat Reagh, and myself. Matrix engraving has emerged as a major part of what is done at Swamp Press. A most exciting project of recreating the Doves type in composition matrices in 2016 was attempted and completed. I hope to expand this proof-of-concept with original fonts in the near future.

At present the trajectory of the press is to do less routine commercial work and return to our roots of publishing with the added pursuit of new faces and ornaments engraved for casting in hot metal.

Having illustrated several books for me in the past, my wife Hyde Meissner (pronounced Heidi) has retired from her psychotherapy career and gone back to her roots as an artist. This is great news for the press.

For those wanting to establish a collection of our limited edition books, there are a few more or less complete sets of our books. And if anyone out there has obscure titles by us that they would like to part with, I’m buying. (For example: Of Stones, by Robert Rayher. This book was done in only fifty copies on Japanese papers, bound in plexiglass and reviewed in Fine Print.)